It’s the second week of January and for the first time in forever, I cooked a real meal and ate while sitting down, read a few pages of a book with my feet in front of the fire, and slept for ten whole hours until Denim the dog urged me out of bed. Yes, just like our fruit trees, I am luxuriating in some long-overdue R&R with the slower winter pace of the farm. But as tempting as it is to be curled by the fire all day, the farm doesn’t ever really sleep. Soon Denim and I are making our daily rounds.

It’s a bone-chilling day in southwest Michigan, around ten degrees with a snappy wind.  Yet, we have a small crew out pruning grapes. In the quiet sanctuary of the winter vineyard, the snip, snip of clippers cutting vines and the light swoosh as the detangled clump hits the blanket of snow is almost startling.

Trimming would seem like an average farm chore, but not at all. Each vine presents a unique puzzle. Some of the old growth stays, but not all. And then there are the crucial decisions about last season’s more slender shoots. While excessive, some are needed for producing next season’s fruit. Which ones will be most easily encouraged to reach the support wire, and which should be sentenced with a quick snip? With the risk of a hard winter or early spring freeze, extra length is needed, but how much? The minds of the professional trimmers speed through dozens of decisions per plant; the snow and cold slow their physical pace.

The parking lot is unplowed; the driveway empty and icy. There are no vehicles in the orchards, except for the beekeepers’ truck parked roadside so they can check on (and worry about) the pollinators we’ll need in a mere three or four long months. It’ll be about that long before our customers return, but a study of the snow reminds us we’re not alone in these quiet fields, forests and outbuildings.

Why were deer investigating the brandy facility? Tracks also reveal, understandably but sadly, that they found the tender tree sprouts in the new heirloom apple orchard. Rabbits abound as Denim and I patrol further, and unhappily discover that bunnies found the young blueberry bushes. Hopefully we have planted enough for customers and critters. Denim stops often to investigate vole and mice trails. We may pay the taxes on the land, but it belongs to so many others!

The daily mechanical monitoring must be done: Is the bakery freezer still freezing? Is the distillery heater still heating? Any roofs in danger of collapsing from weight of the snow? Did the greenhouse plastic survive the recent relentless gusts? 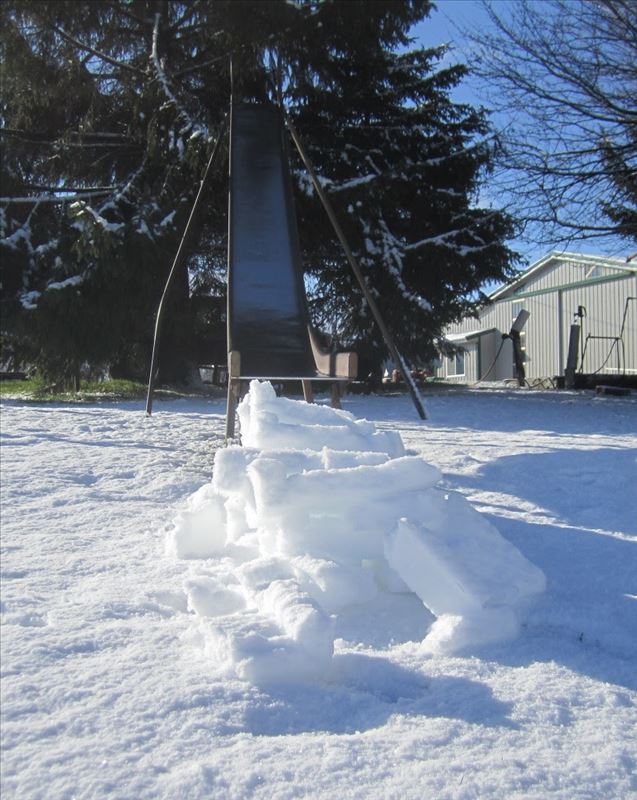 The big farm slide in winter

I scrutinize, but unlike the same patrol route in April or August – I can actually reflect. The remnants of the children’s sunflower maze remains and I smile as I remember the giggling children.  What should we plant for this year’s maze?  What theme would our customer families enjoy?  A walk through the fields show the rubble of pepper plants poking thru snow. Ah yes, the snacking peppers were a hit, along with the grape tomatoes. I must order those seeds for sure.  And the white eggplant?  Yes, unique but customers just wanted the standard purple.

Denim and I turn away from the wind, and toward the farm offices. End of year production reports must be done. Two hours and three cups of coffee later, I find myself in drifts of forms and data. We really had that many strawberries?  The active farm season zoomed by so quickly that we could hardly breathe at times … not to mention track everything.

The winter season allows me to plan and strategize.  I need to scrutinize expenses and projections, and try and guide this operation to success that often hinges on factors well beyond my control. When will spring arrive, and will it stay or slip back and forth, injuring tender blossoms?  Will the orchard sprayer make it through one more year?  If there’s a bumper crop of apples and prices again fall, there goes the budget … but that’s farming. (Barn roofs may also fall; that’s also farming.)

The relaxed pace of winter allows me to appreciate and hope. These two feelings will carry me through until the honeybees are buzzing around the orchards and the giggles of children coming down the big farm slide usher in another season.